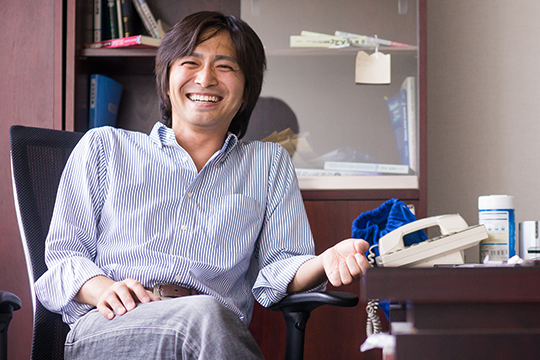 
Essentially, any quantum systems can never be regarded as "isolated systems." Quantum systems are always in contact with "the outside world" and hence, their quantum natures are sometimes sustained and sometimes destroyed. In condensed phase molecular systems, especially, quantum systems are affected by the huge amount of dynamic degrees of freedom such as solvent molecules, amino acid residues in proteins, and so on. Balance between robustness and fragility of the quantum natures may dramatically alter behaviors of chemical dynamics.

One of the notable examples of such quantum dynamical phenomena is the energy transport and energy conversion processes in photosynthetic systems. Photosynthesis provides the energy source for essentially all living things on Earth, and its functionality has been one of the most fascinating mysteries of life. The conversion starts with the absorption of a photon of sunlight by one of the light-harvesting pigments, followed by transfer of electronic excitation energy to the reaction center, where charge separation is initiated. At low light intensities, surprisingly, the quantum efficiency of the transfer is near unity. A longstanding question in photosynthesis has been the following: How does light harvesting deliver such high efficiency in the presence of disordered and fluctuating dissipative environments? Why does not energy get lost? At high light intensities, on the other hand, the reaction center is protected by regulation mechanisms that lead to quenching of excess excitation energy in light harvesting proteins. The precise mechanisms of these initial steps of photosynthesis are not yet fully elucidated from the standpoint of molecular science.

Our group is investigating quantum dynamical phenomena in condensed phase molecular systems such as energy transport and conversion processes in photosynthetic systems through the use of quantum dissipative theories and nonlinear optical response theories in close collaboration with experimental researchers of optical spectroscopy.

The crystal structure of LHCII isolated from spinach, which is the most abundant photosynthetic antenna complex in plants containing over 50% of the world's chlorophyll molecules.