Quantum nature of hydrogen bonds in water manifests itself in peculiar physicochemical isotope effects: while deuteration often elongates and weakens hydrogen bonds of typical hydrogen-bonded systems composed of bulky constituent molecules, it elongates but strengthens hydrogen bonds of water molecular aggregates. The origin of this unique isotope effect of water molecules remains to be elucidated at the molecular level. A recent experimental study on the sublimation of isotope-mixed water ice has tackled this issue.

The physicochemical and biological properties of hydrogen-bonded systems are significantly affected by nuclear quantum effects including zero-point energies of vibrational modes, proton delocalization, and tunneling effect. These originate from the extremely low nuclear mass of hydrogen; thus, hydrogen-bonded systems show remarkable isotope effects upon deuteration. In the 1930s, Ubbelohde first proposed that deuteration elongates and weakens hydrogen bonds in many hydrogen-bonded systems. Ever since, such an isotope effect has been widely confirmed and is nowadays well known as the “Ubbelohde effect.” In contrast, deuterating water molecules in liquid water and ice elongates but strengthens hydrogen bonds. Despite intensive experimental and theoretical studies in more than three-quarters of a century, the molecular-level origin of this peculiar isotope effect on water hydrogen bonds has been unclear.

Very recently, researchers led by Toshiki Sugimoto, Associate Professor at the Institute for Molecular Science, have tackled the longstanding mystery: how do more expanded D2O aggregates form stronger hydrogen bonds than H2O aggregates, in contrast to the hydrogen-bonded systems composed of bulky constituent molecules? By means of isotope selective measurements on sublimation of isotope-mixed ice with various H/D isotopic compositions, the researchers have made a new discovery to unravel the mystery; the isotope effect on the strength of hydrogen bonds are governed by two deuteration effects: (1) the bond-strengthening effect derived from zero-point energy of hindered rotational motion, and (2) the bond-weakening (and elongating) effect derived from quantum anharmonic coupling between inter- and intramolecular modes.

The most important concept is that the deuteration effect (1) derived from rotational motion plays crucial roles in the bond breaking process of extremely small and light molecules. In the case of water aggregates, huge isotopic difference in the zero-point energy of hindered rotation brings out a peculiar nature of the bond strengthening effect (1) overwhelming over the bond-weakening effect (2), leading to the unique isotope effect: deuterated water molecules form longer but stronger hydrogen bonds than hydrogenated water molecules. In contrast, in the case of other typical hydrogen-bonded systems composed of larger and heavier constituent molecules, such as oxalic acid dihydrate, benzoic acid, succinic acid, and cyclohexane/Rh(111), the isotopic differences in the zero-point energy of hindered rotation are negligibly small. Therefore, only the bond-weakening effect (2) is predominant in the isotope effect on their binding energy, resulting in the longer and weaker hydrogen bonds in deuterated systems than hydrogenated systems. Thus, the isotopic differences in the strength of hydrogen bonds are determined by a delicate balance between the competing two deuteration effects (1) and (2), while those in hydrogen-bond length, i.e. geometrical isotope effect, are basically dominated by the deuteration effect (2). “These results and concepts provide a new basis for our fundamental understanding of the highly quantum water hydrogen bonds,” says Sugimoto. 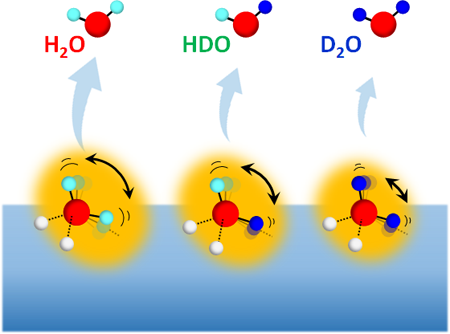