Coronavirus disease 2019 (COVID-19) is caused by severe acute respiratory syndrome coronavirus 2 (SARS-CoV-2). The research group at ExCELLS and IMS performed molecular dynamics simulations to reveal for the first time the mechanism by which drugs such as remdesivir and favipiravir (trade name: Avigan) are taken up by the RNA-dependent RNA polymerase of SARS-CoV-2. The findings were published in Biophysical Journal.

Furthermore, it was found that the probability of uptake into the RNA polymerase binding site tends to be higher for favipiravir than for ATP, and for remdesivir than for favipiravir, although within statistical errors. However, further calculations are needed to make a definite determination.

This research has clarified for the first time in the world the mechanism by which the RNA polymerase of SARS-CoV-2 efficiently takes up nucleotides such as ATP for RNA replication. It was also revealed that the drugs such as remdesivir and favipiravir are also taken up by RNA polymerase by the same mechanism. This finding is expected to contribute to the development of more effective drugs to suppress the replication of SARS-CoV-2 in the future. Furthermore, it is known that lysine residues are arranged in a line not only in SARS-CoV-2 but also in SARS-CoV. Therefore, the findings of this study may contribute to the development of drugs against other viruses that have similar RNA polymerases. 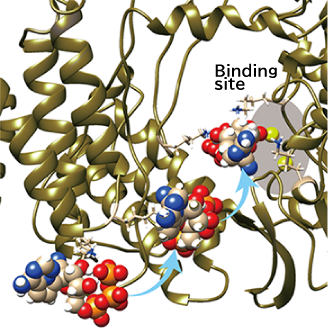 Here is a movie of a molecular dynamics simulation of remdesivir being transferred to the binding site of the RNA polymerase of SARS-CoV-2. The lysine residues transfer remdesivir like a bucket brigade.