Researchers at Institute for Molecular Science in Japan report that novel photon upconversion (UC) system with heterojunctions of organic semiconductors. The solid-state UC system is achieved with an external quantum efficiency of two orders of magnitude higher than those of the conventional systems. Using this result, efficient UC, from near-infrared to visible light, can be realized on flexible organic thin films under a weak light-emitting diode-induced excitation, observable by naked eyes.

Photon upconversion (UC) is a process in which a material increases the energy of incident photons, resulting in the emission of photons with higher energies. The potential applications of UC include the recovery of wasted low-energy photons in photovoltaics and photocatalysis. In addition, near-infrared (NIR) to-visible UC, offering the advantage of high penetration in living tissues, is desired for biosensing, optogenetics, and photodynamic therapy. The conventional UC system relies on a triplet formation from an absorbed photon by intersystem crossing (ISC), which is typically facilitated by heavy-atom effect in a sensitizer molecule (Fig. 1a). The two triplet excitons form high energy one singlet by an annihilation process. Finally, the UC emission occurs from an emitter molecule. However, the conventional solid-state UC is still inefficient, exhibiting a highest external quantum efficiency (EQE) of less than 0.1%, which remains the greatest challenge inhibiting its real-life applications.

Group of Assistant Professor Seiichiro Izawa and Professor Masahiro Hiramoto at Institute for Molecular Science in Japan report that novel UC systems with heterojunctions of bilayer films of organic semiconductors (Fig. 1b). The mechanism of the first step involved in the novel UC relies on the charge separation at the sensitizer/emitter interface, thereby converting the photoexcited sensitizer singlet to free charges. This process is the same as the photoconversion at the electron donor/acceptor interface in organic photovoltaics. Subsequently, the free charges recombine to form the triplet at the interface. The UC emission is observable after the triplet-triplet annihilation. The sensitizer/emitter molecules used in the novel UC system (Fig. 1c) do not contain heavy atoms because the mechanism does not rely on ISC. According to the proposed mechanism, the entire pure sensitizer layer can absorb the incident light and contribute to the UC process. As a result, the solid-state UC system is achieved with the EQE of two orders of magnitude higher than those of the conventional systems, with an irradiation intensity about 100 mW/cm2, which is similar with standard solar fluence. The efficient UC enabled a demonstration of bright yellow emission on a flexible thin film by a NIR light-emitting diode excitation (Fig. 2). The novel UC system does not need strong laser excitation and the expensive platinum-group metals, rare-earth metals, or toxic elements. The finding leads to important applications of UC in flexible solar cells, bioimaging, and optogenetics. 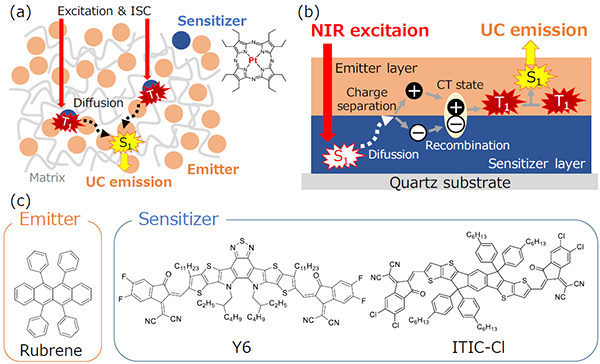 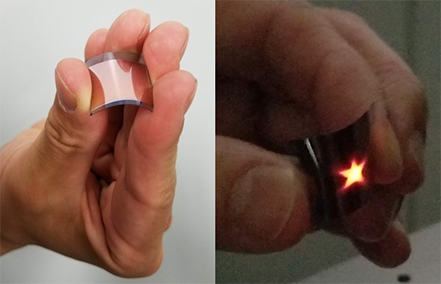