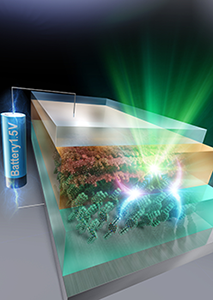 Researchers at Institute for Molecular Science, and University of Toyama in Japan report that an efficient organic light emitting diode (OLED), operable by a 1.5-V battery, that produces bright emission equivalent to luminance of a typical display. The OLED is based on upconversion transition associated with triplet–triplet annihilation that doubles the energy of excited states.

Various properties of organic light-emitting diodes (OLEDs) have been optimized, including current to photon conversion efficiency. An external quantum efficiency  exceeding 20%, with internal quantum efficiency of 100%, has been achieved owing to the development of thermally activated delayed fluorescent and phosphorescent materials that manage the spin of excited states. However, the operating voltage of common types of OLEDs is very high; that of an OLED emitting approximately 600-nm light at a luminance of 100 cd/m2, which is a general display condition, is as high as 4.5 V.

Group of Assistant Professor Seiichiro Izawa and Professor Masahiro Hiramoto at Institute for Molecular Science in Japan, and Associate Professor Masahiro Morimoto and Professor Shigeki Naka at University of Toyama in Japan report that an efficient OLED, operable by a 1.5-V battery, that produces bright emission equivalent to luminance of a typical display. The OLED has a smaller turn-on voltage at 0.97 V than the optical energy of emitted photons at 2.04 eV (608 nm), because the OLED is based on upconversion (UC) transition associated with triplet–triplet annihilation that doubles the energy of excited states (Fig. 1). They reveal that the characteristics of charge transfer (CT) state at the interface are key to efficient UC, and the percentage of excited states deactivated by parasitic loss processes during the UC transition is significantly reduced from over 90% to approximately 10% by introducing a highly crystalline acceptor material and an emissive dopant. Consequently, the UC-OLED reaches 100 cd/m2 at a voltage and emission wavelength of 1.33 V and 608 nm (2.04 eV), respectively (Fig. 2a). This is the lowest operating voltage reported for an OLED that achieves a luminance of 100 cd/m2. It was further demonstrated that the UC-OLED can be operated by a 1.5-V battery to realize luminance of 177 cd/m2 (Fig. 2b).

Fig. 1 (a) Schematic of the device structure and the operating mechanism of OLEDs.
(b) Chemical structures.

Fig. 2 (a) Luminance–voltage curves for OLEDs.
(b) Photograph of an OLED operated by a 1.5-V battery.