• For the past two decades, all quantum computer hardware has been chasing faster gates to escape the effects of external noise that can degrade computational accuracy.

• Cold-atom based quantum computers are rapidly attracting attention from industry, academia, and government around the world as revolutionary hardware that breaks through some limitations of superconducting and trapped-ion quantum computers, which are currently the most advanced types of quantum computers. 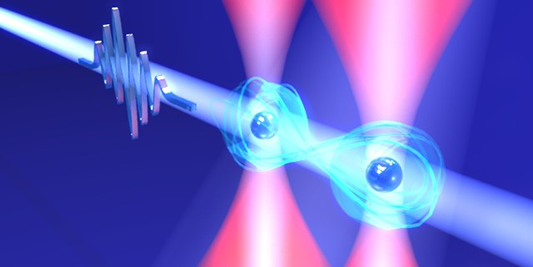 Fig 1．Conceptual diagram of the world’s fastest two-qubit gate. Two atoms captured in optical tweezers (red light) with a separation of a micrometer are manipulated by a ultrafast laser pulse (blue light) shone for only 10 picoseconds.

A research group led by graduate student Yeelai Chew, Assistant Professor Sylvain de Léséleuc and Professor Kenji Ohmori at the Institute for Molecular Science, National Institutes of Natural Sciences, are using atoms cooled to almost absolute zero*1 and trapped in optical tweezers*2 separated by a micron or so (see Fig. 1). By manipulating the atoms with a special laser light shone for 10 picoseconds (pico = one trillionth of a second), they succeeded in executing the world's fastest two-qubit gate*3, see Figs. 1 - 3, a fundamental operation essential for quantum computing*4, which operates in just 6.5 nanoseconds (nano = one billionth of a second). This ultrafast quantum computer*4, which uses ultrafast lasers to manipulate cold atoms trapped with optical tweezers*2, is expected to be a completely new quantum computer hardware that breaks through the limitations of the superconducting and trapped-ion types currently in development.

The results were published in the online edition of the British scientific journal Nature Photonics on 8 August, 2022.

１-１. Cold-atom based quantum computers：
Cold-atom quantum computers are based on laser cooling and trapping techniques celebrated by the Nobel Prizes of 1997 (S. Chu, C. Cohen-Tannoudji and W.D. Philipps, Cooling and trapping atoms with laser light) and 2018 (A. Ashkin, invention of the optical tweezers). These techniques, together with more recent breakthroughs in 2016, allows to arrange arrays of cold atoms in arbitrary shapes with optical tweezers*2 and to observe each one individually.
Because atoms are natural quantum systems, they can easily store quantum bits of information, the basic building block “qubit” of a quantum computer (see Fig. 2). In addition, these atoms being very well isolated from the surrounding environment and independent of each other, the coherence time (the time during which quantum superposition*5 persists) of a qubit can reach several seconds. A two-qubit gate*3 (an essential basic arithmetic element for quantum computing) is then performed by exciting one electron of the atom into a giant electronic orbital, called a Rydberg orbital*6.
With these techniques, the cold-atom platform has emerged as one of the most promising candidates for quantum computer hardware. In particular, it has revolutionary potential in that it can be easily scaled up to a larger scale while maintaining high coherence compared to the superconducting and trapped-ion types that are currently being developed, and is attracting attention from industry, academia and government around the world as the next generation of quantum computer hardware.

1-2. Quantum gates：
Quantum gates are the basic arithmetic elements that make up quantum computing. They correspond to the logic gates such as AND and OR in conventional classical computers. There are one-qubit gates that manipulate the state of a single qubit and two-qubit gates that generate quantum entanglement between two qubits. The two-qubit gate is the source of the high-speed performance of quantum computers and is technically challenging. The one successfully implemented this time is one of the most important two-qubit gates called a "controlled-Z gate (CZ gate)," which is an operation that flips the quantum superposition of a first qubit from 0 + 1 to 0 - 1 depending on the state (0 or 1) of a second qubit (see Fig. 3). The accuracy (fidelity) of the quantum gate is easily degraded by noise from the external environment and the operating laser, which makes the development of quantum computers difficult. Since the time scale of noise is generally slower than one microsecond (micro = one millionth of a second), if a quantum gate that is sufficiently faster than this can be realized, it will be possible to avoid the degradation of calculation accuracy due to noise, and we will be much closer to realizing a practical quantum computer. Therefore, for the past 20 years, all quantum computer hardware has been in pursuit of faster gates. The ultrafast gate of 6.5 nanoseconds (nano = one billionth of a second) achieved this time with the cold-atom hardware is more than two orders of magnitude faster than noise and thus can ignore the effects of noise. Incidentally, the previous world record was 15 nanoseconds, achieved by Google AI in 2020 with superconducting circuits.

2-1. Summary of results：
The research group has used optical tweezers to trap two atoms cooled to nearly absolute zero and separated by only a micrometer. Then, they manipulated the atoms with a special laser beam that glows for only 10 picoseconds (pico = one trillionth of a second) and succeeded in executing the world's fastest 2 qubit gate*3 (the basic arithmetic element essential for quantum computing), which runs in just 6.5 nanoseconds (nano = one billionth of a second). For the past 20 years, all quantum computer hardware has sought faster gates to escape the effects of external noise, which degrades the accuracy of calculations. The world's fastest two-qubit gate achieved this time is more than two orders of magnitude faster than noise, making it possible to ignore the effects of noise. This ultrafast quantum computer, which uses an ultrafast laser to manipulate artificial crystals of cooled atoms aligned with optical tweezers, is expected to be a completely new quantum computer hardware that breaks through the limitations of the superconducting and trapped-ion types currently in development.

2-2. Experimental method (Fig. 1-3)：
The experiment was conducted using rubidium atoms*7. First, two rubidium atoms in the gas phase, which had been cooled to an ultra-low temperature of about 1/100,000 of a Kelvin*1 using laser beams*8, were arranged at a micron interval with optical tweezers*2. They then irradiated them with ultrashort laser pulses that emitted light for only 1/100 billionth of a second, and observed what kind of changes occurred. Two electrons trapped respectively in the smallest orbitals (5S) of two adjacent atoms (atom 1 and atom 2) were knocked into giant electronic orbitals (Rydberg orbitals, here 43D) *6. The interaction between these giant atoms then led to a periodic, back and forth, exchange of the orbital shape and electron energy occurring with a period of 6.5 nanoseconds. After one oscillation, the laws of quantum physics dictate that the sign of the wavefunction is flipped and thus realize the two-qubit gate (controlled-Z gate). Using this phenomenon, we performed a quantum gate operation using a qubit (Fig. 2) in which the 5P electronic state is the "0" state and the 43D electronic state is the "1" state. Atoms 1 and 2 were prepared as qubits 1 and 2, respectively, and the energy exchange was induced using an ultrashort laser pulse. During one energy-exchange cycle (= 6.5 nanoseconds; nano = one billionth of a second), the sign of the superposition state of qubit 2 was reversed only when qubit 1 was in the "1" state (Fig. 3). This sign flip was experimentally observed by the research group, thus demonstrating that a two-qubit gate can be operated in 6.5 nanoseconds, the fastest in the world. 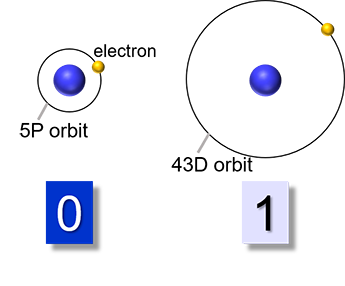 Fig. 3. Operation of the controlled-Z (CZ) quantum gate. (Upper) When atom 1 is in the “0” state, nothing happens. When atom 1 is in the “1” state, the sign of the superposition of atom 2 is changed from positive to negative. This operation is at the heart of quantum algorithm that runs on quantum computers.

3. Future development and social significance of this research

For the past 20 years, all quantum computer hardware has sought faster gates to escape the effects of external noise, which degrades the accuracy of calculations. The ultrafast quantum gates of 6.5 nanoseconds (nano = one-billionth of a second) achieved this time with the cold-atom hardware are more than two orders of magnitude faster than the noise and thus can ignore the effects of noise. The cold-atom quantum computer has revolutionary potential in that it can be easily scaled up to larger scale while maintaining high coherence compared to the superconducting and trapped-ion quantum computers that are currently being developed, and is attracting attention from industry, academia, and government around the world as the next generation of quantum computer hardware. The realization of the world's fastest ultrafast gate, achieved this time by a completely new method of "manipulating two micron-spaced atoms cooled to almost absolute zero using an ultrafast laser," is expected to greatly accelerate worldwide attention to cold-atom hardware.

*2 Optical tweezers
The optical tweezers were invented by A. Ashkin in the 70s. It consists in a laser beam which is tightly focused to a size of less than a micrometer. Atoms are attracted to the bright focus and trapped there.

*4 Quantum computer
A computer that applies the properties of quantum superposition*5 to information processing. It performs information processing on a group of quantum systems, such as atoms, by manipulating their state (superposition of logical 0 and 1) and performing logical operations among multiple particles. By using the superposition property of quantum systems, it is expected that calculations that would take an ordinary computer a very long time can be performed much faster.

*5 Quantum superposition
In a classical computer, a bit (the unit of information) is either in state 0 or in state 1. The situation is much different in a quantum computer where a quantum object, such as an atom, can be in a superposition of two states: the atom being at the same time "in state 0 and in state 1". Furthermore, there are many ways of superposing two states. Thinking of a quantum state as a wave, it becomes apparent that two waves can be superposed with their crest aligned ("state 0 plus state 1") or with the crest of wave 1 aligned with the trough of wave 2 ("state 0 minus state 1"). See Fig. 3.

*7 Rubidium atom
An alkali metal atom with atomic number 37. It has one electron in the 5th orbital (5s) around the nucleus.