A common goal of modern solid-state research is to understand how the macroscopic properties, phases and functionalities of a material depend on the fundamental interactions between its microscopic degrees of freedom, such as electrons, lattice and spin. Insight into such microscopic couplings can be gained from studying the ultrafast dynamics of the solid under nonequilibrium conditions. Pump-probe techniques provide the required time resolution of femtoseconds — less than a trillion of a second, and the time scale on which atoms move.

In spatially inhomogeneous crystals, atomic-scale variations of the crystal lattice and/or its electronic structure will alter the microscopic response — may it be due to imperfection in the presence of defects, or by design due to the growth of nanoscale heterostructures. Yet, very few experimental techniques and limited capabilities exist to date which would allow to study the ultrafast dynamics in solids on the relevant length scales down to a single atom.

Coherent phonon spectroscopy, in particular, is a useful and widely used method in ultrafast solid state physics to study the response of a crystal lattice and its coupling to the electrons after ultrafast photoexcitation. Moreover, coherent phonons can be used, for example, to monitor a light-induced phase transition in strongly correlated materials in real time and even to control its outcome. Despite the important role of the local crystal structure for such dynamics, it has not been possible so far to measure coherent lattice vibrations with high, few nanometer, spatial resolution.

An international team of researchers from the Fritz-Haber Institute of the Max Planck Society, the Institute for Molecular Science in Okazaki, and Osaka University has now succeeded in locally generating and measuring coherent phonons using a scanning tunneling microscope (STM) whose tunneling current is generated by ultrafast laser excitation. Due to heating effects, the major difficulty of such experiments is to realize stable STM operation with pulsed laser excitation. "We achieved this by using plasmonic STM tips made of silver, which allow us to operate at very low laser powers," explains Takashi Kumagai, who is leading the project together with Melanie Müller. In addition, stable light-driven tunneling is facilitated by slightly increasing the tip–sample distance by few Ångstroms compared to conventional STM. In this mode, the team was able to measure  beat patterns of coherent phonon modes locally in ultrathin ZnO films on Ag(111). The phase-stable lattice oscillations, which were excited by a first laser pulse 'pump', periodically modulate the photoinduced tunneling current generated by a second laser pulse 'probe'. Crucially, the laser excitation has to be resonant with an optical transition in the electronic structure of the hybridized ZnO/Ag(111) system. "What is interesting and exciting about these measurements is that the photoinduced tunneling current is not modulated by a periodic change of the tip–sample distance, as one might expect from a motion of lattice atoms in the STM, but likely by coupling of the phonons to the local electronic structure, which in turn leads to a modulation of the resonantly excited photocurrent," Melanie Müller emphasizes. This is a new and previously unexplored mechanism in STM, which opens up new possibilities for the study and control of ultrafast dynamics at solid surfaces and in low-dimensional quantum materials — such as how a light-induced phase transition is locally perturbed, prevented or favored by a defect. 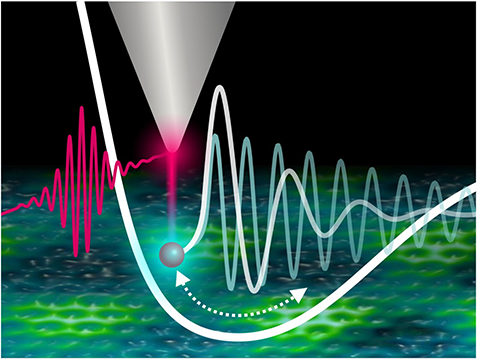 A laser pulse (red) excites a femtosecond pulsed tunneling current in a scanning tunneling microscope, which can be used to measure the oscillation of coherent phonons — phase-stable lattice oscillations — in real-time locally at the nanoscale.