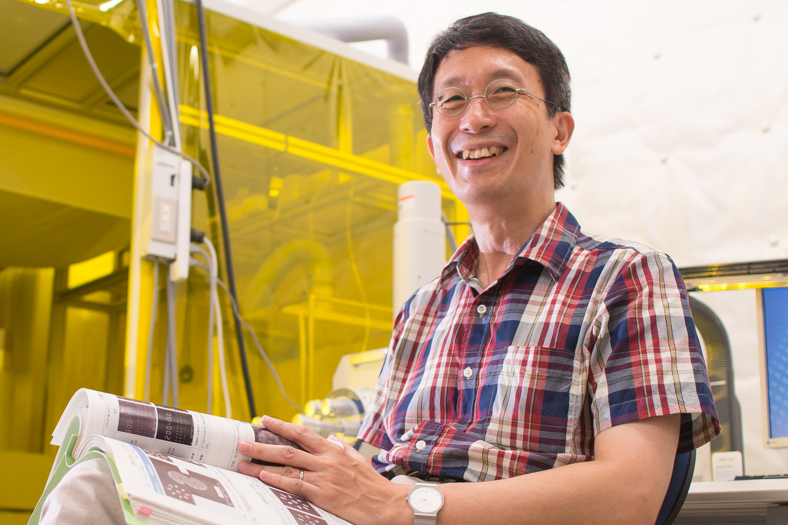 
With the conventional optical microscope, we cannot observe shapes of matters smaller than the wavelength of light (~0.5 μm for visible light). Observation of nanomaterials became feasible with a new method of optical microscopy, called near-field optical microscopy. It enabled taking color photographs (i.e., spectral information) of nanomaterials. It also enabled observing dynamical behavior on the extremely short (10-14 s) timescale at each position on the nanomaterial. With this new microscopic method, we investigate fundamental characteristics of nanomaterials. We found that wave functions of noble metal nanostructures can be visualized. By adopting circularly polarized light, properties of chirality (non-superimposable feature of a matter on its mirror image) became accessible at each local position on nanomaterials.

We succeeded in visualizing the local field as an image with near-field optical microscopy. In the dimeric gold nanoparticles, strong optical field was observed at the interstitial site between the two particles. During the near-field measurement of gold nanodisk, we found a unique phenomenon that light coming through a nano-sized hole is enhanced when the hole is capped with a nanodisk. The result was interpreted as arising from the nature of noble metal particles to collect light.

Near-field optical images of various gold nanostructures. A: Single gold nanorod (length 540 nm). The amplitude of the wave function is visualized. B: Dimers of spherical gold nanoparticles (diameter 100 nm). Strong optical fields are observed in the interstitial sites. C: Island-like assembly of gold nanospheres (diameter 100 nm). Strong field is localized in the rim part. D: Chirality image of gold nanorectangle observed with circularly polarized light. Yellow and blue parts indicate opposite handedness of chirality. Although a rectangle is not chiral, strong local chirality is visualized in this image.