Do you hear the electrons sing?―Reading between the lattices―

In this interview, I will be talking to Associate Professor Emi Minamitani in the Department of Theoretical and Computational Molecular Science. Assoc. Prof. Minamitani is studying theoretical solid state physics. Solid state physics is a basic science based on quantum theory. It not only helps to further our understanding of phenomena, such as magnetism, that seem like magic to children, but its application plays a crucial role in creating technology for our society, like superconductors. 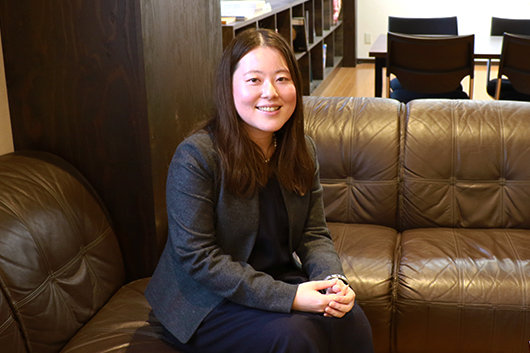 The road to becoming a researcher

Please tell me why you became a researcher.
There were several researchers around me in my childhood. So, I did not think that research was a very special job. Ever since I was a child, I always thought it would be nice to become a researcher. I was interested in the subjects of research fields that children seemed to like, such as the cool dinosaurs in paleontology or the stars in astronomy. In junior high school, I became interested in the humanities when I first encountered the thoughts and mythological systems of ancient people and wondered why they came up with such ideas. As a result, I gradually became attracted to the idea of doing research in the humanities in the future. But in high school, I realized that to become a researcher in the humanities was much more difficult than in the natural science fields. If I really wanted to become a researcher, I would have a better chance in the natural sciences. So, I went on to study the sciences in university.

So your aim was to become a researcher first and then choose your field?
Yes. I was interested in the origin of phenomena and ideas. This holds for both the humanities and the science fields. My current research field, theoretical physics, is in line with my original interest, since it involves thinking endlessly about why phenomena occur in the ways they do. I have relatives who are researchers in science or humanities, so my interests wavered whenever I was influenced by each of them. I think I eventually selected my current subject as a result of various experiences and influence.

If you hadn't become a researcher, what kind of job do you think you would have selected?
Actually, I have many times thought of a career other than being a researcher. However, I am the type of person who does not like doing routine jobs. I have not had many experiences talking with people who work for companies, so I never imagined working for a company at all. I thought doing freelance work from home would be a good fit for me and considered getting some certifications for different jobs or becoming a programmer. For example, I tried getting a license to work as a "labor and social security attorney" when I was in my master's program. Basically, I had a very strong desire to control my own work. I am glad that I was able to become a researcher because we can control our work and freely select what we study.

What was the trigger, or reason, for you to go into your research field, theoretical study on solid state physics?
In my second year of university, I had to choose my major from among the biology, chemistry, and physics fields. I found that the experiments in biology and chemistry seemed to be very difficult. I wasn't very good at experiments, so I thought I couldn't major in biology and chemistry. Then, by a process of elimination, I decided to go for physics. In taking lectures on physics, I became fascinated with the mysteries of quantum mechanics and solid state physics. In my senior year, when I had to choose a research laboratory, I decided to go into a theoretical group. I thought even if I were a little clumsy, it would be impossible for me to break any instruments there. I also thought I would be able to unravel some of the mysteries in physics.

It seems to me that going into the field of theoretical physics simply by process of elimination is not something that ordinary people can do.
Many people say, "Do what you like." But when I hear this advice, I tend to think, "What on earth does it mean for me to 'like' something?" I thought it would be easier to first eliminate the things that were intuitively or physiologically unfit for me and then go in the remaining direction. I tried to work with the things that remained, found the favorable direction, and went in it.

When did you decide on your research topic? You have been studying mainly the physics of surfaces.
Professor Hideaki Kasai, the leader of the laboratory I was assigned to in my university, emphasized, "Surface science is interesting!" After being there for more than five years, I certainly came to think that surface science was in fact interesting. As I mentioned, the Kasai Laboratory was a theoretical physics laboratory, thus, I did not do any experiments. Although doing theoretical research may sound limited, there are many types of theoretical studies, from using only paper and pencil to making full use of computers. I'm actually doing many of these different types of things at the moment. 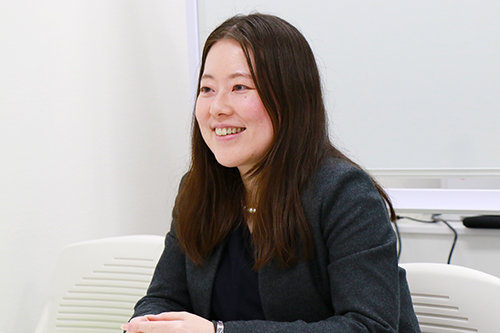 Theoretical research in solid state physics or materials science is probably one of the most difficult fields of science to imagine for the general public. However, it is very important from the perspective of Japan's industrial structure, and I think it is a field where many talented young researchers should come to study. Could you talk about your field in a way that the general public might be able to see its charm?
I've always been a person who is interested in systems of thought and how they were conceived. So, I get a kind of satisfaction when I find an unexpected connection between seemingly unrelated stories. If you are also the kind of person who enjoys discovering an unexpected connection or understanding the underlying logic of something, I think you will enjoy theoretical science.

Do you mean that this type of person could be interested in the forces between electrons and nuclei in a similar way to, for example, competitions between mythical gods?
Reflecting on myself, I find enjoyment in taking a set of rules and applying them to certain conditions in a system to simulate what would happen: physics provides us with the most solid system to do this. Recently, experimental technology has been advancing, and there are cases where phenomena targeted in theory can be observed directly in experiments for the first time. For me, theoretical studies on economic phenomena, for example, also seem interesting. But physics is more appealing because it is reproducible, and there is a stronger correspondence between theory and experiment. In the field of nuclear physics, there are very big experiments using things such as accelerators, or colliders and so on, which may look exciting. But in solid state physics, there are more opportunities to collaborate with nearby laboratories and to work together with our neighbors, which is more appealing to me.

You mean that in physics, we can try things out and check our answers, while in the case of mythology and history all we can do is read about it?
You can't conduct experiments that let you observe how ancient philosophers would discuss topics online with each other, can you? Mythology and history are very interesting to learn about, but I can't directly observe how ancient people would do something to confirm my hypothesis. So, I think physics is more interesting. Most people don't know much about physics. However, if you can regard the logic of physics as an interesting story like, "There are two particles fighting in a dungeon!" this may help to make physics more familiar to you. (Although the essence of the story is inevitably a mathematical equation.)

I see. So, if I become good friends with the characters in the story of solid state physics, such as Ms. Electron and Mr. Atom, I will be able to enjoy their story.

Research philosophy as a professional

Moving on, could you tell me about your research style, philosophy, and aims?The core of my research is basically to pursue what I am interested in. However, I am also aware that being a researcher is a profession with certain responsibilities. As long as I do it as a job, I think I must achieve a certain level of results. I am conscious of the fact that I am always working on two kinds of themes. One is based on my own interests, which may or may not produce results. And the other is to produce results aiming at specific needs or as part of joint research.

You are trying to balance both, and aiming to suit both your interest and practical needs, aren't you?
Yes, I am. But the 'practical needs' are not necessarily limited to industrial applications. For example, if you cannot clarify the theoretical background of a phenomenon that is observed in your experiment, a theoretician can help you. Also, the balance depends on the situation. If I have a big project running, I need to contribute to that project, of course. When it's over, and I have nothing going on, I can devote more time to work based on my interests. It's all about being flexible and being aware of what is expected of me. I believe that I can be a professional because of what I have produced. "Real artists ship," so to speak.

Is it easy to do your style of research at the Institute for Molecular Science (IMS)? And how do you feel about the education environment at IMS?
The research environment at IMS is excellent, and it is easy to do research in accordance with my own style. But I have fewer opportunities for teaching in my current position than before. My previous job was at a university, so I had to spend a lot of time on education. It was a lot of fun to work with and hang out with the students. When one of my students who didn't seem to understand something at first was finally able to write a nice master's thesis, I realized that "education" is great. At a university, besides research and education, there are many other tasks and chores. At IMS, I have far fewer of such obligations and more time to spend on research.